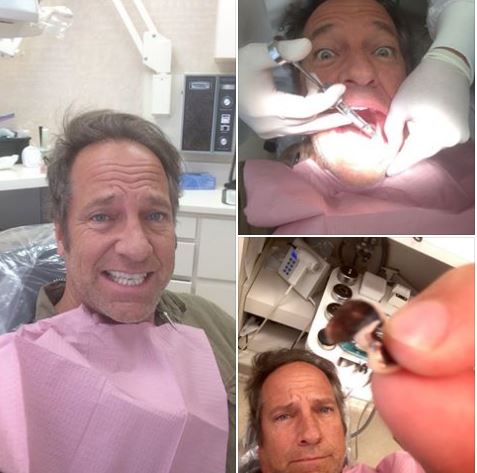 According to Dr. Derek, it was a tiny bit of bacteria that caused the problem. Somehow, it wormed it’s way under my crown and set up shop. There, it copulated with other bacteria, and soon thereafter, their demon spawn chewed away at the bond between the remains of my original tooth, and the man made enhancement which has protected it all these years. Alas, times change, and Newton’s Second Law will not be denied. Things fall apart, the center cannot hold. Mere anarchy is loosed upon the world, etc.

Funny, how enamel, cold and lifeless, is surrounded by the softest of tissue, and the tenderest of nerves.

Funny, how something we rely upon every day, can be so easily forgotten, and so painfully recalled.

Funny, how such a little thing – a microscopic thing – can worm it’s way into the nooks and crannies of our system, hollowing us out from the inside, leaving naught behind but blackness and rot.

Maybe it’s the Novocain – or more likely the post-procedural mimosas to which I feel entitled – but it occurs to me that our country is not unlike the remains of my molar – still there, but very much under siege, and ever more susceptible to decay. It’s been protected for years by a man made cover, but now, the cover needs to be replaced. And that’s gonna hurt.