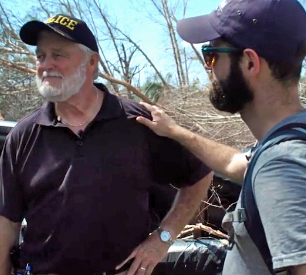 Some people are better than others. Mike Jones, for instance – the Salvage Santa in Panama City we featured on Returning the Favor, is what you might call an above-average human being. Every year, Mike single-handedly makes Christmas morning a whole lot better for hundreds of disadvantaged kids, by handing out bicycles and various other toys. By way of comparison, the creeps who just broke into his storage locker and stole $2,500 worth of Christmas toys are what I’ll call…below average.

My purpose in posting is twofold:
1. To encourage everyone in Panama City to keep an eye out for people selling children’s bicycles. I’d love to see these creeps brought to justice.
2. To let you know that Mike Jones is accepting donations on his website. http://salvagesanta.com/ I typically don’t do this, but when someone on our show is robbed, I feel a certain responsibility to let the community to know about it. Especially in this case, since Salvage Santa is still recovering from the aftermath of Hurricane Michael. No pressure, but if you want to support Mike Jones, this would be the time to do so…