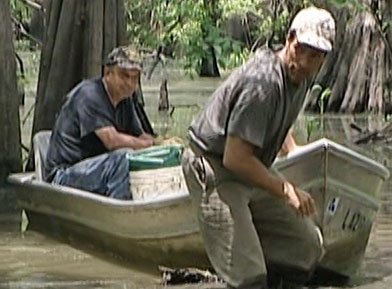 From the MRW Water Cooler:

Q: Are there other shows that you know came from a Dirty Jobs idea? Do you guys get credit for that? – Anita L

I talked to a reporter the other day who observed that Dirty Jobs launched an entire genre of cable programming. That might be a bit grand, but it’s not crazy. Back in 2003, when I first pitched the idea, there was nothing like Dirty Jobs on the air. (Monster Garage however, had proven that a hit show could actually take place in a garage, but there was really not much in the way of workplace/reality.) Deadliest Catch evolved at about the same time as Jobs, and I would agree that those two shows were instrumental in getting networks and programmers to think differently about what was possible in this space. By 2006, every cable network was openly looking for “the next Dirty Jobs,” and the attempts to duplicate the show were everywhere. Today, we have Mudcats, Swamp Loggers, Swamp People, Swamp Brothers, Rajun Cajuns, Killer Shrimp, Lobster Wars, Gold Rush, Bering Sea Gold, Ax Men, Ice Road Truckers, Black Gold, and maybe fifty other shows that were motivated by a segment first seen on Dirty Jobs. I’ve also heard the executives from shows like Pawn Stars and American Pickers reference Jobs when asked about the evolution of those shows, and many others. Ultimately, I would agree that the cable landscape would look very different had Dirty Jobs not come about. However, I’ll happily forgo any “credit” for that, in exchange for accepting none of the blame…