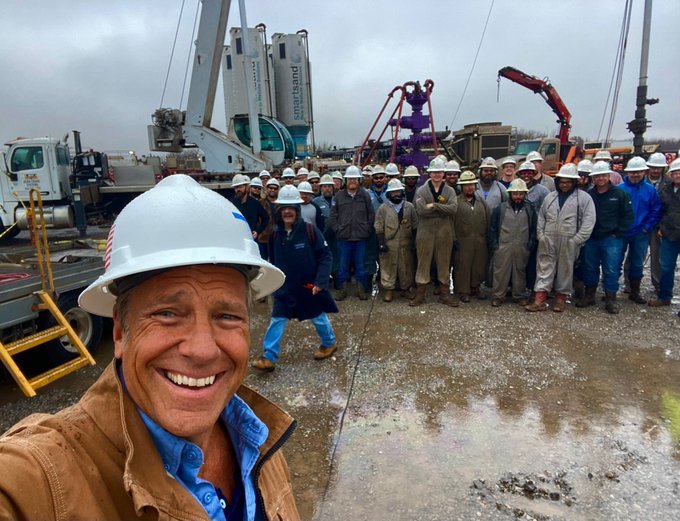 Mike – I took my family to see Top Gun the other night in Oklahoma City, and I was VERY disappointed to see you in an ad for the fossil fuel industry. I love Dirty Jobs and appreciate your scholarship program, but you should do your homework before associating yourself with organizations like the OERB. Our planet is in peril, and fossil fuels are the problem. America needs to get off oil and gas NOW!!! The UN said we have less than 12 years to avert an irreversible climate catastrophe – and that was three years ago! Please use your influence to help deliver that message before it’s too late. Janice Calloway

First, I’m delighted to hear that I shared the big screen with Tom Cruise! The Scientology stuff gives me the creeps, but Top Gun 2 was a terrific movie, and a great way to spend a few hours out of the summer heat. I sure hope I didn’t wreck it for you by espousing the virtues of energy independence.

Second, you’ll be pleased to know that I have in fact done my homework on climate change. I’ve also considered the UN’s doomsday prediction, looked at their evidence, listened to experts on both sides of the debate, and concluded that the earth is probably not going to end in 2031. https://bit.ly/3O9oF24. Obviously, I could be wrong. I don’t have a crystal ball, but I do like this response from The Scientific American. https://bit.ly/3O9oF24. From the article:

“Doomsday scenarios may generate clicks and sell advertisements, but they always fail to convey that science is nuanced. Arbitrary “time left to apocalypse” predictions are not evidence-based, and the real story of climate change doesn’t fit neatly into brief bullet points competing for your attention in today’s saturated media environment. Stoking panic and fear offers a false narrative that can overwhelm readers, leading to inaction and hopelessness. Earth isn’t ending in 12 years. It didn’t end at Y2K or when the Mayan calendar predicted the collapse of civilization in 2012. Earth, as a whole, will be okay—for at least another few billion years.”

The Scientific American isn’t saying there’s nothing to worry about, and neither am I. We both believe the planet is warming, that the seas are rising, and that human activity is a contributing factor. For that reason, The Scientific American and I, along with everyone I know in the energy industry, is very supportive of the ongoing quest to find alternative ways to power America. Unfortunately, no alternative – except for nuclear – has so far demonstrated the potential to eventually replace fossil fuels, and right now, there’s more resistance to nuclear than there is to coal, oil, and gas. That’s tragic, in my view. For more on that, please watch this excellent Ted Talk by an environmentalist named Michael Shellenberger. https://bit.ly/3Oz68vV Here’s the short version.

After years of championing wind and solar, Shellenberger came to believe that both were fundamentally unreliable. Seventy percent of the time, the sun doesn’t shine, and the wind doesn’t blow. He then concluded that we’d need to cover millions of acres of land with billions of solar panels and windmills to generate the energy America needs. In his words, “we’d have to destroy the environment to save the climate.” Shellenberger also determined that wind and solar were a disaster for wildlife. Wind turbines kill millions of birds and bats every year, many of which are either protected or endangered. Solar farms are also terrible for birds, many of which catch on fire when they fly over the panels and plummet to earth like flaming planes shot from the sky. In California, we call them “streamers.” The desert tortoise has been decimated as well, and now, the disposal of countless toxic solar panels is becoming hugely problematic.

Shellenberger then goes on to make a very persuasive case for nuclear energy, which he argues is much cleaner, much safer, and far more reliable than any other alternative. France gets 90% of its electricity from nuclear power. We could, too. The question is, why don’t we? What’s stopping us from vigorously pursuing the only viable alternative to fossil fuel? The answer I think, is fear. Ironically, the same kind of fear that’s got many people convinced the planet will end in nine years. The same kind of fear that leads to false narratives, inaction and hopelessness. The same kind of fear that makes people forget that the earth is still spinning, and we all share the same atmosphere. Consider this:

I’d also love your thoughts on China and India. Those two countries alone burn over 14 million tons of coal every single day. They’ve announced plans to build thousands of new coal-fired plants over the next thirty years – and not the clean-burning kind of coal we’ve developed over here. https://bloom.bg/3OhiWr1 Have you advised them to get off coal “NOW!!!” If not, how come? If so, what did you tell them to burn instead of coal?

It seems to me that CO2 levels around the world could be dramatically reduced if the billions of people currently relying on wood, dung, and coal were able to transition to natural gas. But that’s not what you’re proposing, Janice. In fact, you’re proposing the opposite. You want America to abandon oil and natural gas before we put a viable alternative in place, even as billions of people the world over double down on much dirtier sources of energy. With respect, how does that make sense? I understand you’re worried about the future – I am, too. The future is uncertain. But I don’t need a crystal ball to tell you what will happen today, if America takes your advice. In short, our entire economy will collapse, along with our military, our healthcare system, our transportation grid, and our food supply. Millions will freeze to death. Millions more will die in the heat. Many more will starve.

That’s not a doomsday prediction, that’s just a fact. Every single aspect of modern life depends on easy access to affordable, abundant energy, and wind and solar are not ready for primetime. https://bit.ly/3N3e33j Likewise, most of the products we rely on today are made from the petroleum you despise – the device you’re using right now, the clothes you’re wearing, the tires on your car, and the roads you drive it on. Including the road that brought you to that that (air-conditioned) theater where you sat in comfort, and looked on as Tom Cruise saved the world, (with a little help from jet fuel.)

Point is, Janice, we can’t just flip a switch. It doesn’t matter how many caps and exclamation points you employ, or how many doomsday predictions you quote. Abandoning oil and gas today won’t save the planet; it will merely return us to the Stone Age. In the same way we can’t sacrifice the environment to save the climate, we can’t destroy the present to save the future. We must adapt, as we always have, and I believe there’s reason for hope. I’ve seen some incredible production breakthroughs in the last few years that aren’t getting the attention they deserve. Things like carbon recapture technology, which has the potential to bring energy companies to net zero carbon emissions in just a few years. https://exxonmobil.co/3A0Znio

Long-term, I still think the best hope for the most people is nuclear, and I hope we follow France’s example. But in the short-term, I see no better alternative than natural gas. What I don’t see, is one good reason to purchase the energy we need from a foreign county. There’s something fundamentally immoral about applauding the cancellation of pipelines, buying the fuel we need from places like Saudi Arabia, Venezuela, and Russia, and then paying to have it shipped across the ocean. We have all the energy we need right under our feet – along with a much better, much safer, much cleaner way to extract it. Which is a long way of saying, that’s why you saw me sharing the big screen with Tom Cruise.

The Oklahoma Energy Resource Board is a nonprofit, educational foundation founded thirty years ago by royalty holders in the Oklahoma oil and natural gas industry. Their primary goal is to help Oklahomans understand their state’s unique contribution to our nation’s energy security. Initially, I was attracted to their workforce development message. In Oklahoma, the energy industry employs over 85,000 people, with an average salary over $136,000 a year. That’s over twice the state average, and right now, the industry is hiring in a big, big way. I wanted to help draw attention to those jobs. But the more we talked, the more I came to appreciate their advocacy around the topic of energy independence.

Today, the OERB is pushing back against the common but misguided belief that oil and natural gas are our enemy, and they’re doing so in a way that I find respectful, courteous, educational, and most of all, persuasive. The message you saw was one of several that feature unscripted conversations between me and dozens of Oklahomans about the many ways oil and natural gas have positively impacted their lives. You can see more at OERB.com. Or, you can return to another (air-conditioned) theater next summer, where I’m liable to pop up during the previews of Mission Impossible, just before Tom Cruise saves the world again. (With a little help from oil and natural gas.)

Either way, Janice, I’ll see you around!