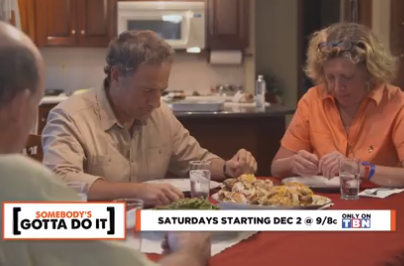 Mike – Are you a Christian? Normally, I wouldn’t ask such a blunt question, especially in a public forum, but I just saw you praying on TBN during a very public promo for Somebody’s Gotta Do It. It surprised me, (pleasantly!) First, because I’d never thought of your show as content for a religious channel, and second, because I don’t recall you ever acknowledging your faith on camera. Will that change, now that Somebody’s Gotta Do It is on TBN? No offense intended, just curious.

Like Dirty Jobs and Returning the Favor, Somebody’s Gotta Do It is an homage to hard-working Americans who live their lives with a blend of passion, humor, kindness, and curiosity. From what I’ve observed, these qualities often appear in people who claim to be Christians, as well as people who claim to be something else. But because I’m fundamentally skeptical of claims, and because faith is an impossible thing to film (or prove) – I’m less concerned with what people say they believe, and more concerned with what they actually do about it. That’s why Somebody’s Gotta Do It, is not called Somebody’s Gotta Believe It. And that’s also why I keep my personal faith, personal.

Having said that, friends of this page should know that this not the same show that aired on CNN. For starters, we’ve cut the episodes down to half-hours. Instead of three segments over the course of sixty minutes, we now have one segment over the course of thirty. That makes a huge difference. It gives us more time to get to know the people we meet, and tell each story in a more relaxed pace. Hence, there’s more room for little moments, (or perhaps, not so little) – like saying grace at the kitchen table. We’ve also added new music, new narration, and a few new edits to address some network concerns with my predilection for naughty words and frosty beverages.

Bottom line, Somebody’s Gotta Do It is a family-friendly romp that celebrates regular people doing something they love. It’s not a “religious program,” but it does feature people who have answered a call of some kind, and I’ve tried to emphasize the wisdom of heeding that call in every episode. In truth, that’s what inspired the show in the first place, and I’m hopeful the TBN audience will like it. I’m also hopeful my friends on this page will give it a fresh look.

The first episode premieres this Saturday, December 2nd at 9 PM, and aside from The Second Coming, I can think of no reason we’ll be preempted. Twelve more episodes will follow, and if all goes well, we’ll dust off the entire series – including the elusive fourth season, which has never seen the light of day.

To sum up…please check out Somebody’s Gotta Do It, this Saturday at 9pm, only on TBN. Now with less cussing, more praying, very little drinking, and more laughs than ever before.

Can I get an Amen?